The art of grilling pizza

The art of grilling pizza 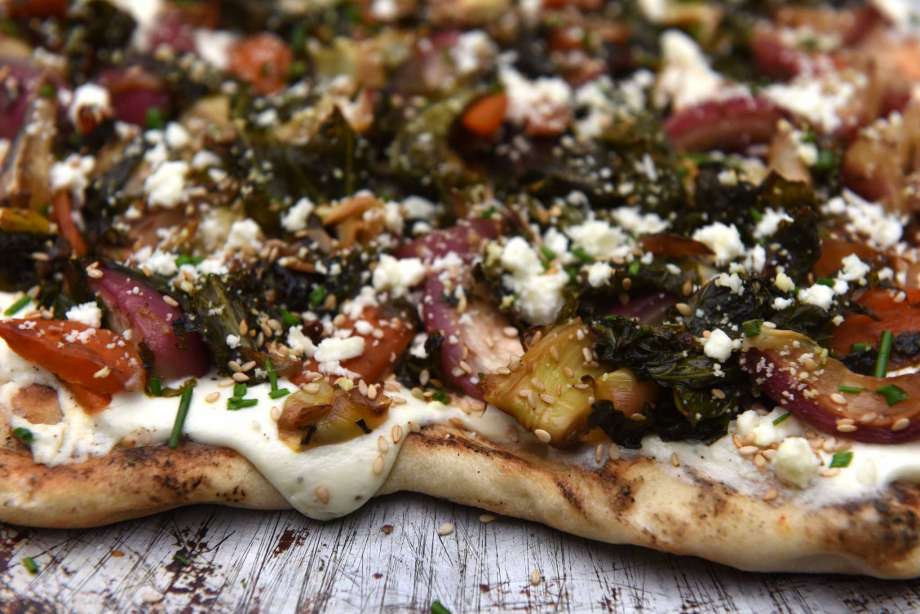 With special attention to crust and toppings, the grilling makes slice of heaven

Every time I take a bite of pizza, whether it’s the fancy, wood burning-oven kind, eaten in a white-linen restaurant and served with a tall glass of wine, or a slice, purchased in a hurry and meant only to curb hunger, I think of New York City. I think of a time, more than 10 years ago, when Paul and I visited the city. Our children were little, and we left them in the good hands of their grandmother. It was the time in our lives when we were buried in parenting, and when she showed up for the weekend, our bags were packed and in the car. With speedy hugs, we ran from the house. We left so quickly that tires might have squealed as we pulled away.

That weekend, we saw art and heard music and ate food in restaurants and from vendors on street corners. We drank coffee and wine and stayed up late. There was a loud band in a crowded bar and long, meandering walks — the kind of walks we love to take in New York, where we’re guided by lights and whims and the very pulse of the city. Where we ended up at no place in particular, and that was exactly the place we wanted to be.

There were so many great things about that weekend, including being away from small children (see squealing tires above). Reconnecting with my husband was fantastic, but really, the pizza we ate in the wee hours might have been the greatest thing of all. There had been dinner that night, in a trendy, chefy place, then music, then a lot of walking. We were so, so tired and ready to sleep, but first: we wanted a late-night snack.

We found a pizza place in the best kind of way, not by looking for it or reading reviews online or even asking people for the best pizza around. Paul and I walked around a corner and there it was, lights shining into the dark night, a beacon guiding us to good pizza. There was a long line out the door, but the smell wafting from the small shop left absolutely no doubt in our minds. We would wait.

The slices, when we finally had them in our hands, were huge. Each was one quarter of a pie and we ate it in the way proper New Yorkers do, by folding it in half and wolfing it down. And though they offered many different toppings, we decided on the simplest: cheese, tomato and basil. The most remarkable thing about that pie was the crunch of the crust. It was thin crust, with just a whisper of sauce, big basil leaves and puddles of fresh mozzarella.

That pizza is long gone, but the memory is fresh. I’ve thought a lot about that night in New York City, about the pizza and especially, about the crust. How does one create a crust like those made in NYC? Is it possible to do at home? The short answer is no. You cannot. But, you can come close. What’s the best way to make a pizza with crust that’s a little bit chewy and crispy and with a tiny bit of greasiness left on your fingers after you’ve devoured it? On the grill.

It’s true. The same machine you use to cook smoky, beefy burgers, pull-apart ribs and crisp chicken works for pizza, too. If you haven’t tried it, you should. Read on for tips about grilled pizza, toppings and how best to put the two together.

Let’s start with the dough. Before I ever laid a piece of raw pizza dough across a hot grill, I was skeptical. I wondered if the dough would fall between the grates and make a terrible mess. It just didn’t seem possible. But it is possible, and it does work. There are a few key things to do with the dough, to ensure success. First, stretch the dough using olive oil. It shouldn’t be dripping with oil, but it should glisten. Also, stretch it pretty thin. Your dough should be about one-quarter inch thick. Expect dark brown grill marks, and touches of black char. (That’s the good stuff!)

First, the classic pizza recipe, the Margherita. This is the recipe that started it all! It’s not complicated, and I don’t recommend adding or taking away from a simple Margherita pizza. There’s a reason that classics are classics, and this is a great example. The sweet and garlic-y tomato sauce makes an excellent bed for melty, soft cheese. I like to leave the basil leaves whole, just because it looks so fine on the finished pie. Chop them if you like.